John Handem Piette’s viral parody sequel ‘America Endgame II: Soul of the Nation’ is out and shows US President Donald Trump and President-elect Joe Biden battle it out for control of the Senate

Remember the viral meme video ‘America: Endgame? A parody remix video featuring the US President Donald Trump as the Marvel villain Thanos and the US President-elect Joe Biden as Captain America – created by New York-based filmmaker John Handem Piette – was viewed over 50 million times across YouTube, Facebook, Twitter and Instagram. Now, there is a sequel out and it is already picking up traction.

Piette took a month to complete this video due to the complexity of editing. He tells MetroPlus over email, “I was motivated by what was going on in the news and also many of the people who loved the first video wanted me to do a follow up to see Trump finally be vanquished. To put it into context, I had to animate the heads and mouth movements separately and go frame to frame; that’s 24 frames per second over 10 minutes of video … it was grueling to say the least. “ 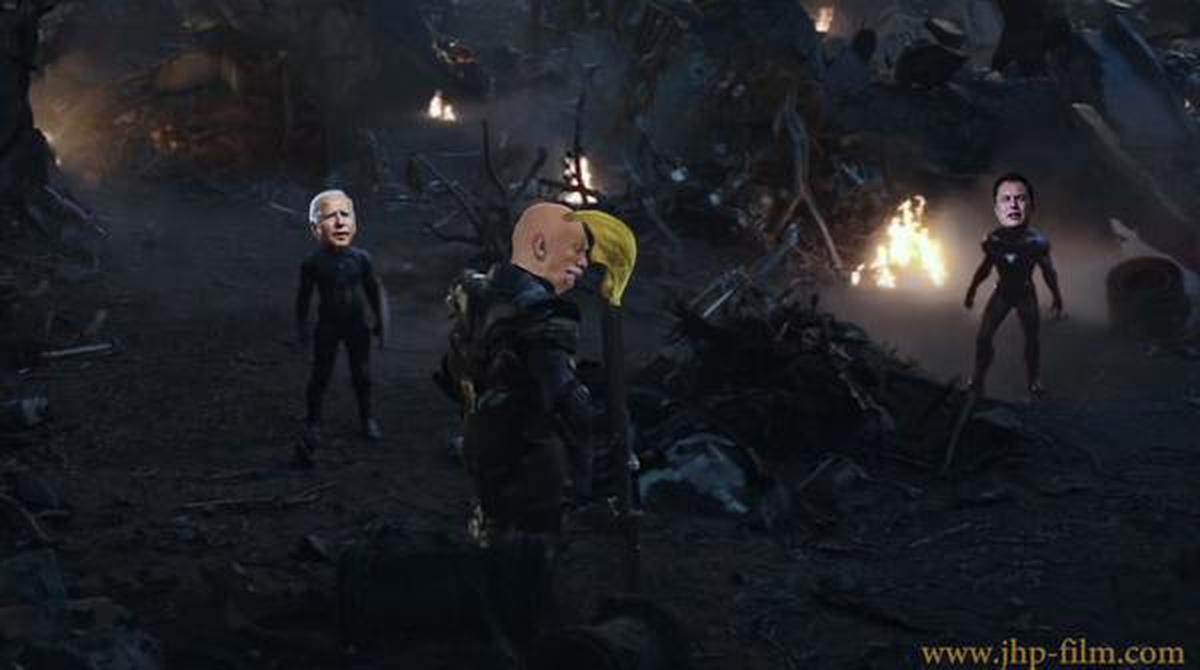 Featuring many laughter inducing moments – such as Thanos ‘attacks as the Coronavirus, and Captain Marvel as the COVID-19 vaccine -‘America Endgame II: Soul of the Nation ‘ is far more emotional than the first. In light of the US Capitol Hill siege protests on January 6, Piette had delayed the release of the parody to January 8, “to let tensions simmer and to re-assess what I’m conveying and putting out there.”

With this in mind, the filmmaker continues, “There are a lot of people watching what I put out now and so I always try to be mindful of the message I’m sending out with my work and hopefully the overwhelming sentiment is unity and love with some humor to help ease our worries and uplift us… Seeing these events play out in meme form and as a fantasy parody contextualises it a little more for me since it is all so hard to believe in the first place. ” One scene featured a memorial for Beau Biden, the late son of President-elect Biden, and Piette explains why this was important. “Beau is a huge part of his father’s motivation to run for President. I don’t think we would have President Biden without Beau’s final dying wish being for his father to run for President one more time. I actually wanted to include Beau in the first one, but I could find no appropriate cameo for him and had to let it go. But I knew he would have to be a big and emotional part of the sequel, ”says Piette.

Not only is America Endgame II more emotional, but it is also more confronting with the U.S ‘tough political climate. We don’t just see Biden and his supporters fighting Trump and his MAGA army, but also organisations, such as gas company ExxonMobil and the National Rifle Association (NRA), that have long endangered public safety.

Piette explains, “I wanted to give more context to the battles each of these politicians and heroes are facing. [New Jersey junior Senator] Cory Booker and [Governor of New York] Andrew Cuomo has each faced some big battles with the NRA over the past year and I thought it was great to see New York’s Governor team up with New Jersey’s Senator. ”

Piette points out that featuring Greta Thunberg [as Pepper Potts] in the first video was a mere cameo and he felt he had to show her “laying waste to a fossil fuel company and paying off [her initial appearance in America Endgame]. ” Now that the Democrats control the Senate I think we can finally see real reforms on climate, gun control and healthcare … things we’ve been waiting for in our country for a long time. “

While many felt the first parody could have addressed Trump’s past accusations as a sexual assaulter, America Endgame II finally addresses it, but sensitively so. Piette was careful here, teaming the scene of Scarlet Witch getting her vengeance on Thanos for taking away her loved ones. “I felt like we brush all the sexual assault allegations against Trump under the rug and it’s important that he faces the consequences of his actions even if his supporters don’t care,” Piette points out, “These are very serious allegations and it was important to me to include that scene. “

Headlines over the weekend saw Twitter officially suspending Donald Trump’s personal account permanently. Alike, Piette made sure his latest video reflected this profound move on Twitter’s part, by having a screenshot of the profile dissipate into dust. He recalls creating this moment as “cathartic” because he felt the way Trump leveraged his account was “incredibly dangerous.” 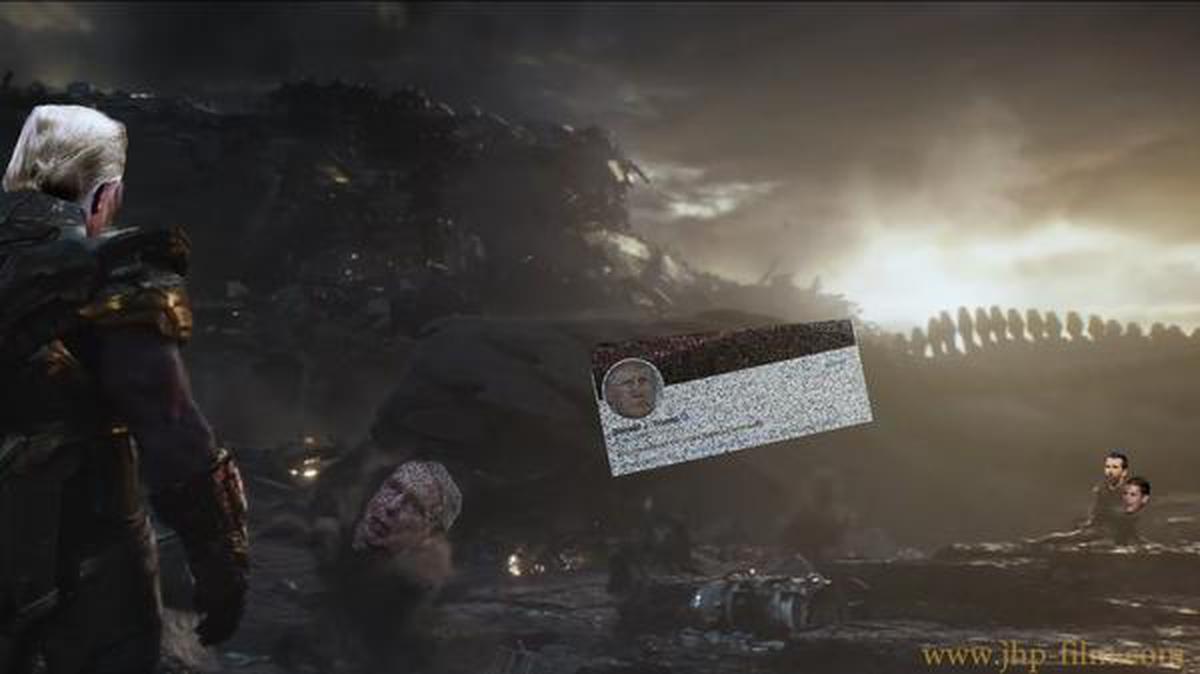 The new parody also has a whole new sound: remixes of the Avengers score many already know quite well. Piette admits he wanted these new remixes to “help reflect the modern and real nature of the characters depicted but also to give people a fresh palate of sounds and music that distinguishes America Endgame as separate from Avengers but still in the same world.”

An homage to BLM

However, the “big twist to the sequel” is the Black Lives Matter movement, which meant a lot to Piette who is also African-Amercan. He explains, “Having Kobe Bryant and his daughter Gianna grace the skies along with innocent people who needlessly lost their lives to racist violence was a very cathartic visual. I actually left that moment to the very end because I knew it would be tough to work on along with another emotional cameo at the end that is sort of the big twist of the sequel. ” 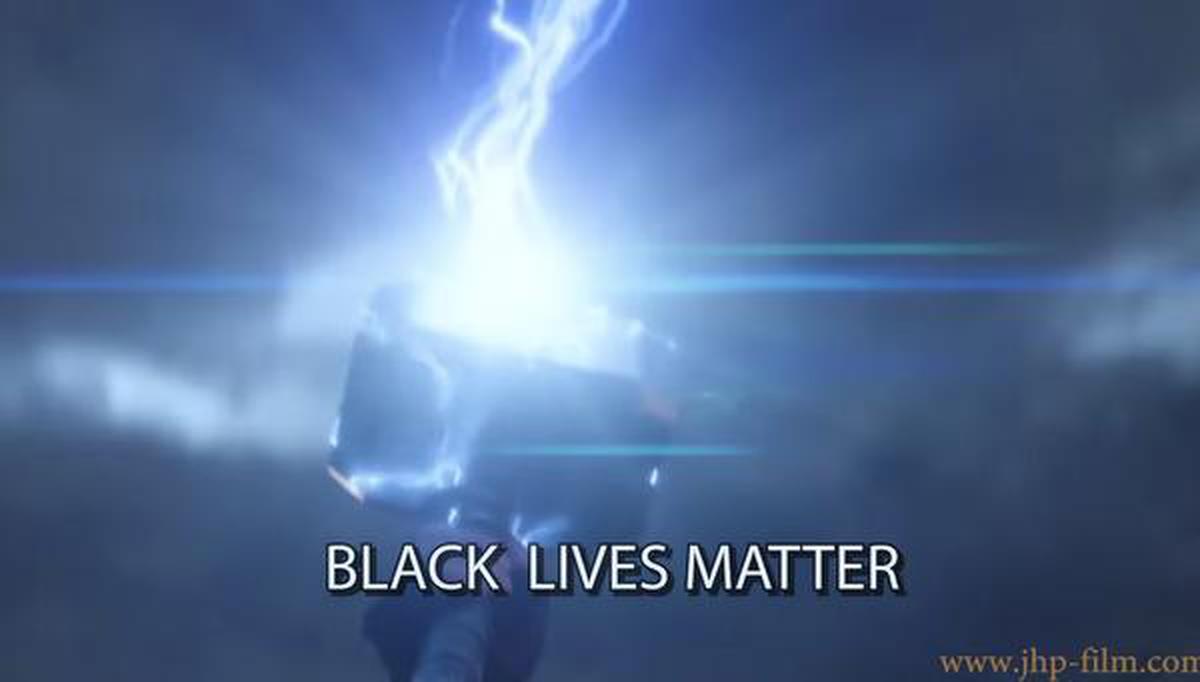 Piette continues, “To know they are all together in a better place, and also [former U.S. Representative] John Lewis and the various other heroes who arise from the dead was an important and resonant theme for both pieces which is why I wanted to name this video Soul of the nation. We lost so many people in 2020 – so many legends – and I thought it would be comforting for us to know they are still by our side fighting the good fight. “

The virality of the America Endgame videos has seen Piette looking forward to new vistas of filmmaking. “I’ve had some doors open for me career-wise and several brands have reached out for various marketing and social media campaign videos,” he shares, “I’m also in talks with several producers about my own film projects and other opportunities to write and create more content that’s socially relevant but also entertaining and moving. “