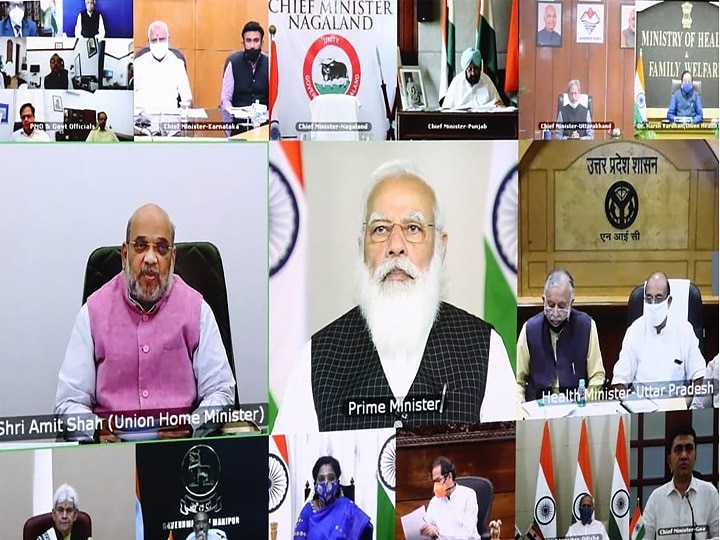 New Delhi: Prime Minister Narendra Modi on Wednesday chaired high-level meeting with Chief Ministers via video conference and expressed concern over the sudden rise of daily coronavirus cases in various parts of the country and urged states to bring in “quick and decisive” measures to check the emerging second wave of the contagious virus.

During the meeting, PM Modi also pointed out the issue of vaccine wastages in some states.

While interacting with the CMs, PM Modi said that in states like Maharashtra, Punjab and Madhya Pradesh, the number of Covid-19 cases has seen a rise while nearly 70 districts in the country have seen surge in positivity rate by over 150 per cent.

“If we do not stop it here, then a condition for a nationwide outbreak may emerge,” PM Modi said calling for quick and decisive steps to stop the spread of Covid-19.

1. PM Modi’s meeting with Chief Ministers of various states and union territories (UTs) comes on a day when India recorded over 28,000 fresh Covid-19 cases taking the nationwide tally to 1,14,38,734.

2. While speaking with CMs, PM Modi said that the confidence brought by India’s fight against the Covid-19 pandemic so far should not cause carelessness. He also asked CMs to take strict measures to curb the spread, including more testing, implementing of preventive measures as well as increase in number of vaccination centers.

3. “People should not be put on panic-mode but need to ensure that they get rid of this problem as well. Test, track and treat” should be taken as seriously now as it has been for over a year since the outbreak, “PM Modi said.

4. Prime Minister also reiterated that RT-PCR tests should make up for more than 70 per cent of overall testing in the country, while noting that states like Chhattisgarh, Uttar Pradesh, Kerala and Odisha have been mostly dependent on antigen tests.

5. More importantly, PM Modi also spoke against wastage of vaccines and called for more vaccination centers. He highlighted the issue of vaccine wastage in states like Uttar Pradesh, Telangana and Andhra Prasdesh. “Need to take issue of wastage of vaccines doses very seriously. Over 10 per cent vaccine wastage is taking place in Telangana and Andhra Pradesh. In UP, it is almost the same. It should be reviewed why this is happening. Monitoring must be done , “the PM said.

6. PM also extended the fact that most of the Coronavirus-affected countries in the world had to face several waves of Corona. “In our country too, cases have suddenly started increasing in some states. CMs have also expressed concern,” PM Modi said adding that positivity rate in Maharashtra and Madhya Pradesh is very high and number of cases are also rising significantly.

7. “Such an increase is being seen in many districts that had protected themselves so far and were kind of safe-zones. 70 districts of the country have seen an increase of more than 150 per cent in the last few weeks. If we don’t stop it here, a situation of nationwide outbreak can come up, ”PM Modi warned.

8. Further in his address, Prime Minister also said that it has now become necessary for us to become pro-active. “The option of making micro-containment zones wherever necessary, we should not bring leniency,” he added.

9. However, PM Modi cautioned the state government not to bring the public into panic mode. “We don’t have to bring a situation where there is an atmosphere of fear. We have to free the people off difficulties by taking some precautions and initiatives,” PM Modi said.

10. Today meeting was Prime Minister’s first such interaction with Chief Ministers ever since the government launched Mega vaccination drive on January 16. Last year, Prime Minister held several such virtual meetings with several Chief Ministers, with the last such discussion held in January ahead of the rollout of the drive.