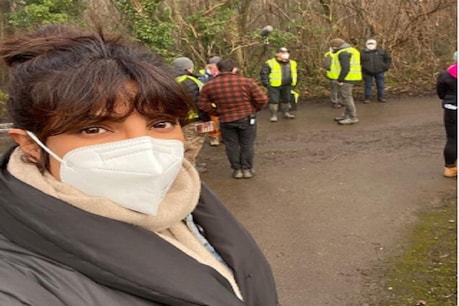 Priyanka Chopra has completed shooting for the Hollywood film ‘Text for You’. Directed by James Strouse, the movie is influenced by the 2016 German-language film ‘SMS Fur Ditch’, which was based on Sophie Kramer’s novel by the same name.

London. Actress Priyanka Chopra has completed the shooting of her upcoming Hollywood film ‘Text for You’ in London. Directed by James Strouse, this romantic film is influenced by the 2016 German-language superhit film ‘SMS Fur Dich’ which was based on Sophie Kramer’s novel by the same name.

Priyanka Chopra shared the image from her official Instagram account and informed about the completion of the shooting. In this picture, she is seen taking a copy of the script of the film. He wrote, ‘It has ended. Congratulations and thanks to the entire team. See you in the film.

A few hours before this, she posted another one, in which she was seen wearing a mask and many people were seen in the background. He has written in the caption of the image that, I will miss this wonderful team with which I have spent the entire 3 months. It was very special to work with this team.

Last month, Priyanka Chopra told that she and her film production team undergo a Kovid-19 investigation every day in the shooting that takes place between the corona virus epidemic and social distance is also followed. Let us tell you that Priyanka is preparing for the release of her upcoming film ‘The White Tiger’ at this time. The film is directed by Ramin Bahrani and the film is based on the novel published by Arvind Adiga by the same name. The film premieres on Netflix on January 22.