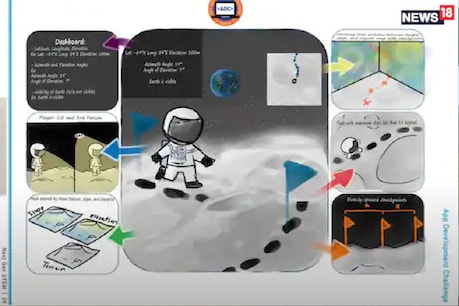 Aryan and his team have won the Armitis Next-Gen STEM-Moon to Mars App Development Challenge, organized by the US space agency NASA.

new Delhi. Indian students keep illuminating the name of the country at the international level. This time too, an Indian student of High School has raised India’s value in the field of Space (International Science) internationally. The name of this student is Aryan Jain. He is a student of Suncity School of Gurugram. Aryan and his team have won the Armitis Next-Gen STEM-Moon to Mars app development challenge organized by the US space agency NASA.

According to information NASA This was quite a complex coding challenge. This year, NASA’s Space Communications and Navigations (SCan) organized a competition under which students were to create a mobile application that could outline the mission of landing on the moon’s south pole and conducting an investigation there.

Aryan Jain was a member of the team called ‘Team Unity’. Apart from him in his team, Anika Patel, Andy Wang, Franklin Ho, Jennifer Jeong, Justin Ji and Vedika Kothari included. He was in the joint team of 5 global schools formed under the leadership of Whitney High School of America. Now in February, all these team members have been invited to interact with NASA scientists and big people from the space sector industry.

The app created by the team has many special features. One of them is a small map. This map will technically help astronauts during their mission to land on the moon. The app has path finding options, depiction of the lunar surface and 3D scene. The team has used all the available information of the moon’s south pole to prepare this app.