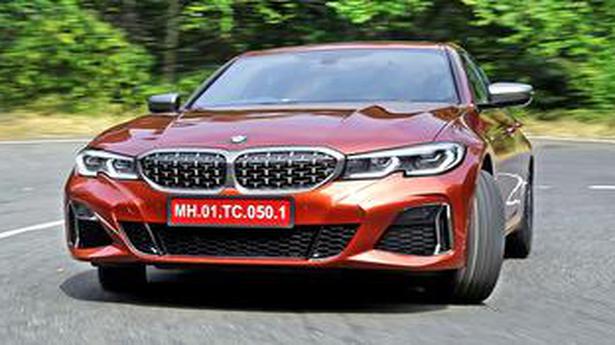 With variable-ratio steering and upgraded brakes, the M340i offers a nice, tied-down feeling in the corners and good composure at high speeds

While at first glance this may look like a regular 3 Series with a few cosmetic tweaks, the BMW M340i is much more than that. This car is powered by a 3.0-liter in-line six petrol engine – a unit that has been absent from the mainstream 3 Series line-up for a while now, though you do get a twin-turbo unit in the last-gen and new M3s. So, what is the car like?

The power the M340i packs is certainly its biggest calling card – 387hp and 500Nm from a 3.0-liter turbocharged straight six. This is the same unit as in the larger 740Li, 840i and the X5 and X7, but like in the Z4, it has been fettled by the M Division to be altogether more aggressive. A sports exhaust also means that it sounds better too. BMW claims a 0-100kph time of 4.4 seconds; we achieved a time of 4.36 seconds in our tests.

The engine does not give you quite the punch in the guts as an M3, but it revs freely and smoothly all the way to 7,000rpm in every gear, every time. The M Division has worked on the suspension too, which is 10mm lower than a 330i’s and a bit firmer too. There are no adaptive dampers, which is a bit of a shame for a dual-nature car of this sort, but BMW says they are saving that for the M3 and M4.

Coming to the xDrive system, this car does not get the specialized M version seen in the likes of the M5, so you can’t switch to RWD mode. However, putting the car in Sport or Sport + does apportion more power to the rear, and there is also a sports rear differential that shuffles torque left to right to pull you out of a corner faster. The result is a clearly rear-biased feel and the M340i has quite a bit of safe under-steer built into it.

On the styling front, there is very little visual differentiation between this and the 330i M Sport. Only real afficionados will spot the gunmetal gray accents, or the grille’s different pattern for its slats, or that this car is equipped with the higher-spec Laserlight headlamps. The 18-inch alloy wheels are just the right size and look good but again, they are exactly the same set you will find on a 330i.

Differences inside are even fewer; the most noticeable being the neat textured dashboard trim and the black part-Alcantara upholstery with a few embellishments in the signature M colors. The equipment list is largely the same as the 330i M Sport, with the only notable additions to the M340i being the higher-spec adaptive LED headlamps with laser high beams, a 16-speaker Harman Kardon audio system, a heads-up display and – finally – Android Auto in addition to Apple CarPlay, both of which work wirelessly.