Virat Kohli and Anushka Sharma welcomed a baby girl on January 11, 2021. The Indian skipper released a note on his social media pages and since then congratulatory messages have been pouring in for the new parents. Celebrities from the world of cricket and entertainment have been constantly dropping comments and messages for Virat and Anushka. From Madhuri Dixit Nene, Priyanka Chopra Jonas to Samantha Akkineni, celebs have been showering love for the couple on the arrival of the little princess.
Priyanka took to her Instagram story and shared Virat’s post. She wrote, ‘So happy for you guys. Congratulations Anushka and Virat. A big hug and much love especially to your little princess. @anushkasharma @ virat.kohli. ‘ 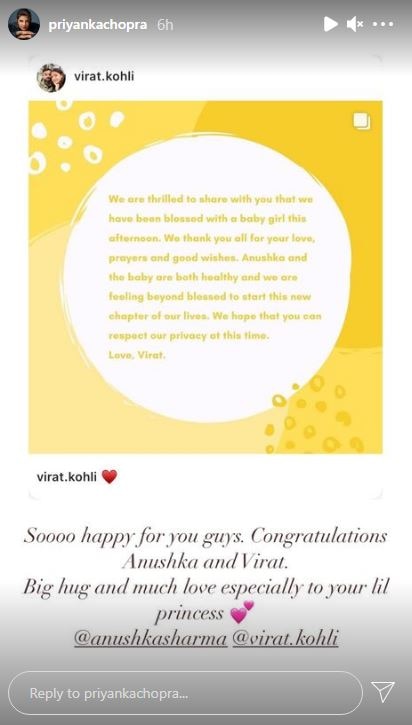 While Samantha posted, ‘Best news! @anushkasharma @ virat.kohli … so much love to the three of you. ‘ 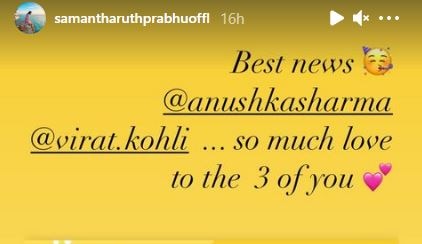 Madhuri Dixit tweeted, ‘Congratulations @imVkohli @AnushkaSharma. May God shower his choicest blessings on you and your little angel. ‘

Anushka Sharma’s Dil Dhadakne Do co-star Farhan Akhtar tweeted: ‘Heartiest congratulations to Anushka Sharma and Virat Kohli on the birth of their daughter. Lots of love. ‘

‘Many Congratulations Anushka Sharma and Virat Kohli. This is such great news! May god bless your family with great health, happiness and abundance of love, ‘read Ritesih Deshmukh’s tweet.

Meanwhile, Virat’s statement on the arrival of Anushka and his daughter read as’ we are thrilled to share with you that we have been blessed with a baby girl this afternoon. We thank you all for your love, prayers and good wishes. Anushka and the baby are both healthy and we are feeling beyond blessed to start this new chapter of our lives. We hope that you can respect our privacy at this time. ‘
Anushka Sharma and Virat Kohli announced their pregnancy on social media in August last year. They got married in a private ceremony in Tuscany, Italy in 2017 after dating for several years. Anushka Sharma and Virat Kohli had met during the shoot of a commercial.